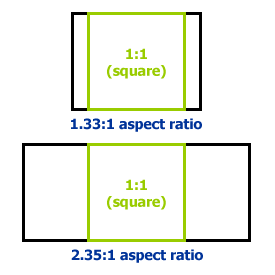 What Is An Aspect Ratio?

The accepted standard for "widescreen" is any device or piece of content where the visual portion has an aspect ratio wider than 1.33:1 or 1.37:1. This will likely change now that 16:9 is the new standard for TV and computer monitors.

The first known event to be filmed in an aspect ratio wider than 1.33:1 is the Corbett-Fitzsimmons boxing match in Carson City, Nevada in 1897. Not only was it the longest film up to that time at roughly 100 minutes long, it was filmed on 63mm film in a 1.66:1 AR.

Other films were shown in a wide array of aspect ratios. For example:

Several other formats were used, but often were restricted to use by one studio and quickly died out as the Great Depression took its toll on the national economy.

Academy Ratio: The Standard for Decades 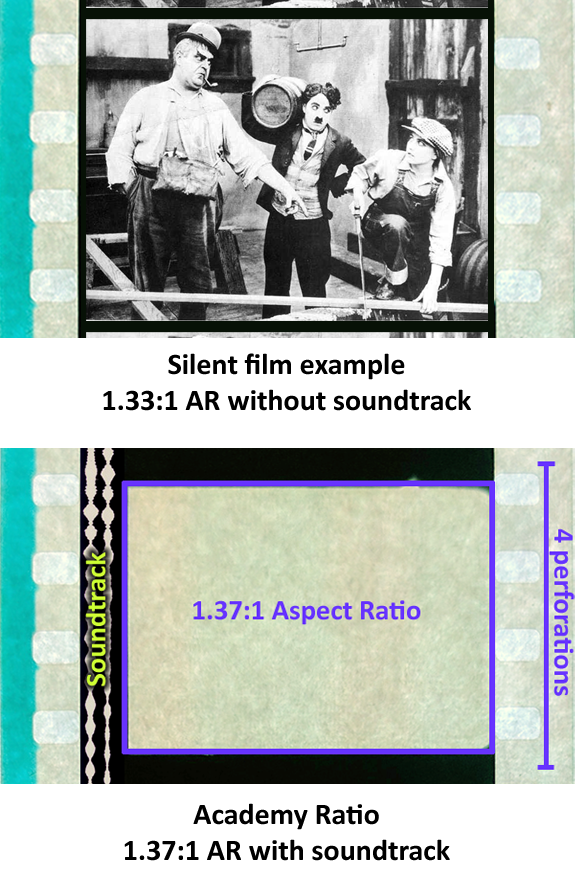 Although several formats were available, most silent films were made in a 1.33:1 aspect ratio where each frame of film used four film perforations per frame with a very thin line between frames.

When sound was integrated, the analogue audio track, which runs along the side of the film, reduced the visual width to around 1.2:1. This caused problems for many theaters that had fixed-width screens and projectors that could not move. Additionally, many movie patrons who grew accustomed to 1.33:1 complained that the new aspect ratio was disorienting. Studios attempted to find ways of getting back to a 1.33:1 aspect ratio with little success.

The first attempt at standardizing the format took place in 1929 when all major US studios agreed to a 1.33:1 aspect ratio. This included dimensions and aperture settings for projectors as set by the Society of Motion Picture Engineers (SMPE). Further modifications to this standard were considered throughout the next few years.

In 1932 the Academy of Motion Picture Arts and Sciences (AMPAS) and the SMPE finalized the aspect ratio for 35mm film and aperture settings for projectors. This new film standard, set at 1.37:1, was labeled as the "Academy ratio". All films were shot in this ratio until 1952.

Although precursor technologies to television date back to the mid-1840s and televisions themselves were available in the 1920s, the movie theater was the main source of visual entertainment and news throughout World War II. Once World War II ended, consumer demand for TVs skyrocketed in many countries, particularly in the US, England, and Russia. By 1954 over half of the households in the US had a television.

Consumers were conveniently staying at home with their new TVs, many of which had an AR of 4:3 or 1.33:1. The movie studios needed to come up with a way to get people back into the theaters. As a result, the widescreen format was born.

The first wide-format motion picture to usher in the new widescreen era was This Is Cinerama at the Broadway Theater in New York in 1952. Although it was more of a technology demo than an actual movie, it was the first time that people had the opportunity to see a widescreen movie since the adaptation of the Academy ratio. Optimally projected at 2.65:1 AR, This Is Cinerama was filmed with three 35mm cameras and shown with three 35mm projectors on a massive, curved screen.

In 1953 several movies were released that marked the debut of various aspect ratios:

But Which Came First?

There appears to be some debate as to what the first widescreen movie was in regards to both filming and releasing in widescreen. The Robe (released in September 1953) is often quoted as the first movie to be both filmed and released in widescreen. Chronologically, however, This Is Cinerama (released in September 1952) came out a year before The Robe. Why This Is Cinerama is often ignored is perhaps because it was more of a tech demo than what we think of as a "movie"; however, it still was released to public audiences first.

Another wrinkle to the argument is that How To Marry A Millionaire (released in December 1953) started filming before The Robe; however, it was released later. So, the argument as to the first Cinemascope movie is up for debate, based on whether you consider the start of filming or the actual release date to be the main factor. However, I will still argue that This Is Cinerama is the first movie to be released to the public that was filmed and shown in widescreen.

(I also argued that HD-DVD would be the prevailing format, so what do I know?)

When you watch a movie on your television screen, you're not necessarily seeing it the way it was originally intended. As a director, when I set up a shot and...there are two people in the frame, with the wide screen I can hold both with one person on each end of the frame. When that shot is condensed to fit on your TV tube, you can't hold both [actors] and the intent of the scene is sometimes changed as a result. -- Leonard Nimoy, Commentary for the Director's Edition of Star Trek IV: The Voyage Home

The Trouble With TV

Although the widescreen format helped to bring people back to the theaters, the wide format presented an obvious problem when the time came to show those movies on TV: how to show a wide movie on a 4:3 TV screen.

To resolve this problem, widescreen movies were edited through a process called "pan and scan", where a virtual 4:3 "frame" focuses on one particular part of the scene. The inevitable effect of this process is that a large part of the movie (sometimes as much as 52%) is cut off. Although many directors did not like having their movies shown in this way, TV technology was not capable of clearly and conveniently showing movies in their original aspect ratio (OAR) for many years.

Letterboxing (And Pillarboxing) To The Rescue

During the late 1980s TV screens became larger and home video became a dominating force in home entertainment. The desire to see movies in their original aspect ratio by both movie buffs and movie creators became evident when laserdiscs were released. The sharper resolution of laserdisc and its acceptance by movie purists, as opposed to the average user who preferred videotape, rapidly increased demand to watch movies in their intended aspect ratio. As a result, most movies on laserdisc were shown in "widescreen" format to preserve the aspect ratio of the movie's theatrical release.

The widescreen or "letterbox" process takes the entire frame and reduces the size in proportion so that the entire frame fits within the width of your TV, allowing the movie to be seen in its original aspect ratio as the film makers intended. However, this can result in what are inaccurately called "black bars" at the top and bottom of the TV screen. In reality, these "black bars" are unused areas of the screen. The areas are often black to allow for better contrast; however, studios would occasionally show patterns or designs that are relevant to the content instead of solid black, particularly during credits sequences.

Similarly, if the source material is narrower than the TV, such as showing an older 4:3 TV show or movie (like The Wizard of Oz) on a 16:9 screen, "pillarboxing" (sometimes called "windowboxing") will likely be used where the "black bars" are on the sides of the screen.

Regardless of where those black areas show up, when you see them you are most likely watching the content in the aspect ratio that was originally intended. (Showing widescreen movies in a reduced aspect ratio, such as showing a 2.35:1 movie in 2:1, was uncommon but did happen.)

With pan and scan, as much as 50 percent of the original picture is lost. It's simple math, folks. Something has got to go. And sometimes what is lost is very important. Now how about this scene from "The Graduate". Where have you gone, Mrs. Robinson? You've been panned and scanned right out of the scene.-- Jack Lemmon in a pro-letterbox demo for the now-defunct Artists Rights Foundation

One of the early arguments against widescreen was that TV sizes were too small and the resolution of VHS (333×480 for NTSC and 335×576 for PAL) was too low to make widescreen movies worth watching. Widescreen adovcates claimed that the lower resolution was not enough of an excuse to justify the pan-and-scan process and that the intent of the filmmakers should take priority.

To satisfy both types of viewers, starting in the early 1990s many VHS tapes (and DVDs later on) were made available in two formats: the widescreen version in the original AR when applicable and the paradoxically-named "fullscreen" version that was presented via pan-and-scan or open matte to 1.33:1 AR.

(I say "paraoxically" because while it allowed a 4:3 TV screen to be "full", it was not necessarily showing the full visual frame of the original content, depending on the source material.)

Because of the increased screen size and resolution, "full screen" or "modified aspect ratio" content is no longer sold. Movies and TV content on almost all DVDs, Blu-rays, and Ultra-HD Blu-rays are available only in the original aspect ratio. Most streaming services have content in the correct AR as well.

Due to various restoration efforts and reissues on newer formats, most content is available in its original aspect ratio. Unfortunately, the film elements of some movies and older TV shows have degraded to a point where a proper restoration might not be possible. Lack of demand also prevents many movies and TV shows from being made available because restoration is not financially feasible. That means that many movies and TV shows have been released on VHS or DVD in a modified aspect ratio (if at all) but will not be released or properly restored in their correct aspect ratio.

Although not very common, some stations have shown 2.35:1 content, such as the Lord of the Rings trilogy, in a pan-and-scan 1.77:1 (16:9) format for broadcast on their HD channels.

Additionally, some broadcasters, particularly TBS, still show older 4:3 content in what detractors call "stretch-o-vision" where the image is stretched horizontally to fill a 16:9 screen. This distortion results in circles that look like horizontally-stretched ovals and people who look unnaturally wide. Such content should be properly shown in 4:3 pillarbox format.

In an e-mail from 2007, TBS stated that "In an effort to present a consistent broadcast, we have decided to maintain the same aspect ratio for all HD programming. An unfortunately [sic] consequence of this is that the standard TV ratio of 4:3 is presented as 16:9. This is what 'stretches' the image. We apologize for any inconvenience this has caused." This is a particularly poor judgment call by TBS because the general public does not complain about pillarboxing as they once did about letterboxing.

This reaction is more puzzling because TBS sister station Turner Classic Movies was one of the first TV channels to advocate for movies to be shown in their correct aspect ratio. Often, TCM and A&E, which used to focus on classic movies, would not only show the widescreen version of movies but also produced their own commercials to explain why widescreen was better for most classic movies, particularly musicals.

As TBS clearly proves, even with all of the advances that have been made to preserve movie and TV content in their original aspect ratios in the past few decades, some issues regarding proper content presentation still remain.